In the second half of the 20th century, the construction and building sector was characterized by a concrete craze that assumed vast proportions on all continents. At the same time, the technique of reinforcing the concrete with steel bars or rebars was developed. In the beginning, people did not realize that these steel bars would cause such major problems after only a short period of time. Due to the formation of rust, the steel bars began to expand and the concrete began to crack, which led to gigantic safety problems.

The highly alkaline conditions inside concrete provide a passivating environment for the reinforcement bars. A thin layer of oxides forms on the steel surface. This oxide layer is stable in the alkali-rich solution and protects the steel against further corrosion. The steel is unlikely to rust as long as the passivating conditions remain at a pH of 10. 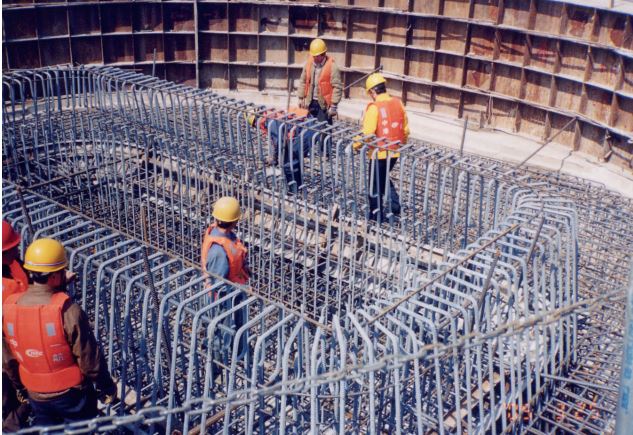 Passivation can be destroyed due to a reduction in alkalinity. This can have various causes:

The rust can form up to 2 times the volume of the initial steel and can cause cracking of the concrete or even the complete destruction of it.

In comparison with all other methods of protection that have been tried out on reinforcing steel, a thin layer of ZINGA (approx. 40-60 μm) provides the best protection at a very low and cost-effective price.

The Hangzhou Bay Bridge is a highway bridge with a cable-stayed portion across Hangzhou Bay and connects the harbors of Shanghai and Ningbo. At 35.673 km (22 mi) in length, Hangzhou Bay Bridge is among the ten longest trans-oceanic bridges.
In May 2005, ZINGA was applied on the rebars used for this project. A supplementary extension to the project (emergency platform) prescribes ZINGA for the entire construction.